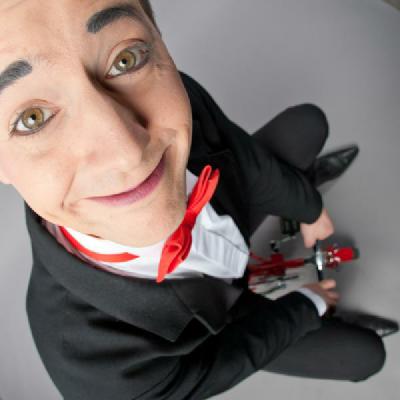 Born in Coesfeld / Westfalen, the son of the legendary Circus tour conductor Siemoneit-Barum, David Paschke, as he is called by civil name, lives alternating constantly between “normal” and circus life.

As a child he enjoyed entertaining and inspiring people. Not surprisingly, he chose to become a comedian, a clown, and a comic early in life.

After training to be a hotel manager in one of Germany’s largest conference hotels, he returned to the circus, thus fulfilling his biggest dream.
For several years FiLu wrote the clowns’ plots for the travel season of Circus Siemoneit-Barum. The tours lead him through the whole of Germany and also to the International Circus Festival in Enschede / Holland.
Since then, FiLu has excited audiences in TV shows, gala or corporate events, fairs, town festivals and private functions whilst at the same time remaining faithful to Circus and Variety.  He conceived his extraordinary own events, such as the comedy Magic Dinner Show “FiLussima”and the “Göttingen Christmas Circus”.

Filu loves to slip into different roles and delight and inspire people of all ages – his purpose in life, ever since he can remember!